We’re never short of candidates for “the next big thing” in the IT industry. Not surprising given the rate of change, but even for those of us working in the industry it can be disorientating. One of the latest contenders is "Serverless Cloud Technology". So, what is it, and how the heck can you run any software without a server?

Well, you can’t. The term “serverless” refers to the developers experience of the platform, not the underlying architecture. Serverless cloud computing is simply an evolution of existing cloud technologies.

Ultimately, cloud computing is about delivering Software as a Service (SaaS), online applications such as an email or sales system. Most companies that deliver a SaaS solution don’t own the computers that host the software. Some simply rent servers from a cloud provider. This is the simplest form of cloud hosting, called Infrastructure as a Service (Iaas).

IaaS removes the cost and maintenance burden of the hardware for the developer. However, there’s still plenty of work to provision each machine and the environment to host the application. So, around 2006 cloud service providers began building platforms using a technology called containerisation. Containerisation allows multiple processes to run on a single machine, sharing the hardware resources yet remaining isolated from each other. “Platform as a service” (PaaS) meant developers only paid for the compute resources they needed (rather than whole machines) and could quickly scale those resources as their requirements grew. 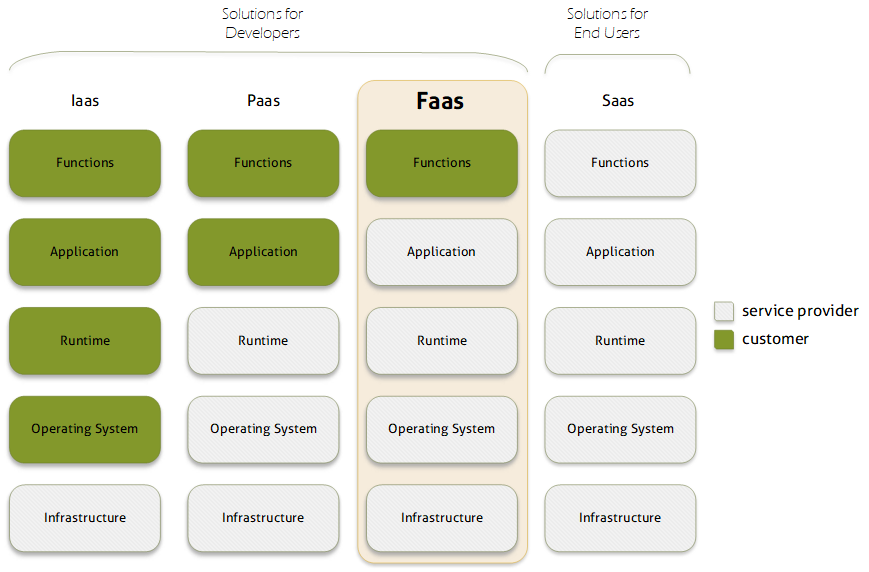 Serverless cloud computing, sometimes called “Functions as a Service” (FaaS), takes this abstraction a stage further. Most applications only require compute resources in response to events. For instance, an email application only needs to do something when an email arrives or a user logs in. For large periods of time it’s just sitting around waiting for something to happen. An application on a PaaS platform needs to be permanently loaded into a container, waiting to respond to these events. Generally, a single containerised instance of the application will service many requests, and additional instances will be started to cope during busy periods. However, starting additional containers can take several minutes, so PaaS platforms can be slow to respond to spikes in traffic. On a serverless platform, the developers code is run “on demand” only when these events occur, with the compute resources required also delivered “on demand”. The developer only pays for compute resources when they are being used, not when the application is waiting for something to happen. More importantly, the application can scale virtually instantly to almost any level of demand.

Serverless computing does have its drawbacks. It imposes constraints on the design of the software, for instance all functions must be stateless, and it’s difficult to move applications between different providers. However, it does offer a very powerful new paradigm for cloud computing. One which for many developers can deliver significant cost and performance benefits.